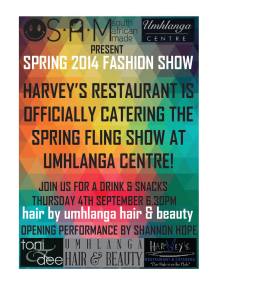 SAM Store is bringing you a Fashion Show

There will be fasion and food and drinks and Shannon Hope will be performing.

Have you bought a brick yet?

The TAFTA Buy-A-Brick Programme is aimed at involving ndividuals  in helping us provide more sheltered accommodation and care for older people.

We’ve produced booklets containing 20 symbolic paper bricks that cost R10 each and schools are encouraging pupils to sell the bricks.

The TAFTA staff and residents have given the phrase, “Charity begins at home” a whole new meaning. They’ve also taken up the challenge to sell as many booklets as possible.

The campaign runs until June 2015. 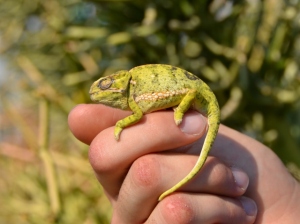 During the first week of June 2014, a young Flap-necked Chameleon barely 5cm in length was brought to uShaka Marine World’s Dangerous Creatures after being found on the roadside in Umhlanga Rocks.

The little one was so severely dehydrated that both his eyes were sunken, his skin was black and his movements were limited.  It was thought that his condition was possibly a result of in-adverse poisoning and not roadside trauma.  He began rehydration treatment immediately and was left in a quiet corner to rest and allow his organs to respond to the administering of fluids.

On the second day when he was still alive he was started on a course of antibiotics and left alone to rest for most of the day.  By the fourth day when he started moving (albeit slowly) and showed signs of fighting for survival he was named Themba (which means hope) and offered crickets.

Chameleons don’t generally respond well to human care but little Themba proved the exception and ate the two crickets offered to him twice daily.  Slowly over the next two months his skin colour changed, he started moving around more steadily and his right eye healed completely.

Chameleons conical eyes have fused eyelids leaving just a pinhole through which to see. They revolve independently allowing a 360o arc of vision.  Once they have a target in sight both eyes swing round to focus providing a stereoscopic depth perception for an accurate strike.

Chameleons can shoot out their tongues further than their own body length at a speed of three hundredths of a second.

Themba now spends his days in a specially designed movable exhibit outside rehab enjoying the sun and fresh air.   He is still being hand fed in the mornings as he is unable to focus on prey without two good eyes.  It is hoped that within the next month his left eye will fully recover enabling his release into a protected area in KZN.

Flap-neck Chameleons are found in tropical Africa southwards to KwaZulu Natal and although they are not considered endangered but are a highly threatened group.  Their greatest threats are humans through habitat destruction and chemical poisoning of their natural prey  which consists mostly of grasshoppers and beetles.

Less than 2 % of all Flap neck chameleons survive to adulthood – let’s do what we can to increase this number as they play a vital role in the natural web of life.

For more info – go to www.ushakamarineworld.co.za

This edition by Fred Felton

The Lifestyle Magazine For Africa